The information provided on this website does not, and is not intended to, constitute legal advice; instead, all information, content, and materials available on this site are for general informational purposes only.  Information on this website may not constitute the most up-to-date legal or other information.  This website contains links to other third-party websites.  Such links are only for the convenience of the reader, user or browser; the Raub Law Firm, P.C. and its members do not recommend or endorse the contents of the third-party sites.

Readers of this website should contact their attorney to obtain advice with respect to any particular legal matter.  No reader, user, or browser of this site should act or refrain from acting on the basis of information on this site without first seeking legal advice from counsel in the relevant jurisdiction.  Only your individual attorney can provide assurances that the information contained herein – and your interpretation of it – is applicable or appropriate to your particular situation.  Use of, and access to, this website or any of the links or resources contained within the site do not create an attorney-client relationship between the reader, user, or browser and website authors, contributors, contributing law firms, or committee members and their respective employers.

The views expressed at, or through, this site are those of the individual authors writing in their individual capacities only – not those of their respective employers, the Raub Law Firm, P.C., or committee/task force as a whole.  All liability with respect to actions taken or not taken based on the contents of this site are hereby expressly disclaimed.  The content on this posting is provided “as is;” no representations are made that the content is error-free.

Many of workers who slipped pleas for help into the pockets of Zara clothes they made have reportedly still not been paid despite an international outcry.

Some 140 Turkish workers at the Bravo Tekstil factory claimed they had not received three months worth of back wages and severance after the factory shut suddenly in the summer of 2016 earlier this month.

It is understood the owner of the company, which made clothes for high street brands such as Zara, Mango and Next, has disappeared.

Their plight came to light when the Clean Clothes Campaign, an activist group trying to improve conditions in the garment industry, teamed up with the workers to slip notes into the pockets of clothing in stores across Istanbul begging for help.

The notes, in Turkish, said: “I made the item you are going to buy, but I haven’t been able to get my money!”

The group said they targeted Zara in particular because 75 per cent of the work they did was for that country.

The news prompted outrage around the world, with 293,000 million people signing a Change.org petition directed to Inditex, Zara’s parent company, demanding they pay the lost wages.

In response Inditex, along with Mango and Next, said they had already set up a hardship fund for the workers which would be overseen by the global trade union for garment workers, IndustriALL.

But the garment workers said many of them had been excluded from the fund because it was reportedly only designed to compensate the 77 workers IndustriALL deemed “blue collar”, CBC News reported.

They classified 63 workers as “white collar” – meaning they had some seniority or did not work on the factory floor – and said this meant they were not entitled to compensation.

Bahar Ugur, who worked as a secretary for the company, said she was owed around 20,000 lira (£3,800) for three months wages and six years’ severance pay, but she is unlikely to see a penny.

“There are people who couldn’t pay their rent, people who had newborns”.

She said they had originally felt “safe” at the company because it made them feel like they were part of a “family” and it was “a big deal to work for them”.

The Clean Clothes Campaign’s representative in Turkey, Bego Demir, said the distinction between white and blue collars is arbitrary and illegal.

“They already signed an agreement and said we’re accepting our responsibility for all of our supply chain”, he said.

Inditex has previously been vocal about the need to improve labour conditions in the garment industry. 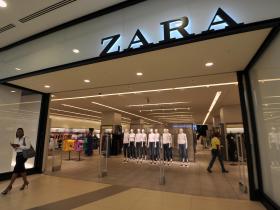 How Zara gets a coat into stores in just 25 days

Last month it sent out a press release about a meeting between its CEO, Pablo Isla, and the Director-General of the International Labour Organisation, Guy Ryder, in Geneva, Switzerland to “explore the progress made to date” on initiatives to improve conditions in “China, India, Brazil, Indonesia, Turkey and Cambodia”.

During the meeting, Mr Isla stressed “Inditex’s firm commitment to the ILO conventions, on which our Code of Conduct for Manufacturers and Suppliers is based, and to the United Nations Sustainable Development Goals, especially those related to decent working conditions”.

Their Code of Conduct states: “Manufacturers and suppliers shall also ensure that wages and any other allowances or benefits are paid on time and are rendered in full compliance with all applicable laws and specifically, that payments are made in the manner that best suits the workers.”

A spokeswoman for Inditex told The Independent: “Inditex has paid all its contractual obligations to Bravo Tekstil but the factory’s owner has disappeared fraudulently.

“Inditex has developed a proposal with IndustriALL Global Union (the International Federation of Unions which represents more than 50 million workers globally), together with the brands Mango and Next to establish a hardship fund for the workers affected.

“This hardship fund would cover unpaid wages, notice indemnity, unused vacation and severance payments of workers that were employed at the time of the sudden shutdown of their factory in July 2016.

“At this point in time, IndustriALL with the support of Inditex is still negotiating with its affiliate union in Turkey to try to reach an agreement. We are committed to finding a swift solution for all of those impacted.”

The Independent has contacted Mango, Next and IndustriALL for comment.

If you or someone you care about has been hurt in an accident, you need the help of a personal injury attorney from Timothy D. Raub and his law firm. An accident can cause major disruptions to our lives and can place tremendous emotional and financial burdens on us. In the aftermath of an accident, an injured person may require medical treatment, be forced to miss work, and have to put their regular life on hold. A skilled Corpus Christi personal injury lawyer can minimize the damage caused by these unexpected events and can help the injured person get back on their feet.

If you’re considering bankruptcy, you’ve probably grown tired of the phone calls from collectors, the threats of lawsuits, and the struggle to pay off your debt. Bankruptcy is a way to start over. It’s a way to reorganize your finances and start out with a clean slate – no more debt, no more trouble with creditors. The idea of bankruptcy may be frightening, but it exists to help you deal with debt, not to punish you for having it.

Texas law prohibits retaliation against an employee who files a complaint about an employer's violation of the wage and hour laws. If you have filed a complaint against your employer and are being retaliated against, we want to talk to you.

Unfortunately, the potentially liable parties will likely devalue your injuries or outright deny responsibility for them. This is why the experience of a personal injury lawyer can be crucial. My knowledge and skill can make the difference in how your claim unfolds, in settlement negotiations or in the courtroom. This may translate to tens or hundreds of thousands of dollars - perhaps even millions - depending on the severity of the accident.

99% Of Cases Settle Out of Court

I know the law is complex and difficult to navigate, especially if you or a loved one just suffered an injury.
If you or a loved one has been the victim of a car accident caused by a negligent driver, it is important to be well informed so that you have a higher likelihood of obtaining the proper recovery your situation deserves.

For over 20 years, the Raub Law Firm has recovered and handled thousands of cases. Those cases we handled are local citizens here in Texas. We pride ourselves in helping our local community and we dedicate our time to helping you recover from a personal injury or financial burden you may have going on now in your life. We can help you with that burden and greatly ease the stress from these situations.

Please contact us at anytime. You will hear back from us within 10 to 60 minutes.

You are now subscribed, thank you!

There was a problem with your submission. Please check the field(s) with red label below.

Your message has been sent. We will get back to you soon!

COVID-19
Updates and Announcements
Raub Law Firm, P.C. remains fully operational and committed to serving our clients and colleagues throughout the Coronavirus (COVID-19) crisis. As we follow the CDC guidelines and practice social distancing, we remain available for phone consultations and remote meetings with both current and prospective clients and colleagues. Please contact our office by message or by calling 361-880-8181 with any questions. We look forward to hearing from you.